I'm happy to host author Emerald today.  If you've had the opportunity to meet her in person you know she is unforgettable, right down to her glittery green shoes.  I first got to meet her a few years ago at Hot Mojave Knights and she inspired me to work on my own author brand, and up my game. She is also admin of a popular facebook page Marketing for Romance Writers, and is a positive force for all writers.   Please welcome her. 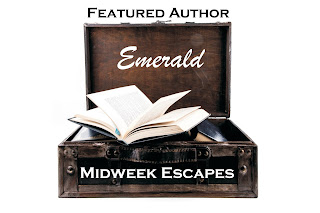 At the risk of sounding dramatic, Niagara Falls simply calls me. Funnily enough, what first really drew me to them was my reading of a novel years ago that was set there. It was a historical novel, based in Niagara Falls, Canada, just after the turn of the twentieth century during the start of World War I. To be frank, I didn’t particularly care for the novel overall, but I found myself enchanted by the description of the setting. I interpreted a thematic undertone perceiving Niagara Falls as a natural phenomenon that was being, as has seemed not uncommon, overtaken or at least influenced by human construction and interference.

I felt fascinated that this was the perception of (some of) the characters even then, more than 100 years ago—how at the time, there were heated debates about the Falls: was it justifiable to divert the flow of water to generate electricity, for example, and if so, where does the line get drawn? At what point is it inappropriate for the human species to manipulate the natural world to suit its desires? (A salient question right now indeed, it seems…)

Now, of course, Niagara Falls seems as much a place for casinos and entertainment as it does a natural wonder around which such decadence has been built. I find this also interesting to observe, particularly in the context of its relative debate counterpart in the novel. Is everything we build and develop “progress”? What, if anything, do we owe the natural systems and formations of the planet on which we live?

These questions do not have easy answers, as I see it. I myself demonstrated the tension between them during my solo writing retreat to Niagara Falls in 2013. It was unquestionably the earth-based, natural phenomenon of the Falls that I went to see—the vast tourism that surrounds it didn’t and doesn’t interest me in the slightest. And yet, I simultaneously benefited from the contemporary convenience of a Canadian-side Fallsview hotel, which offered me a room with a stunning view of the Falls (the recollection of which literally makes me yearn to be there right now) and unquestionably represents human interruption of the environment.

I had all the more motivation to locate this writing retreat at Niagara Falls because one of the stories in If… Then is partially set there. Protagonist Shelley also feels tension around the Falls, though for quite different reasons from those described above. Shelley adores Niagara Falls, a favorite vacation spot of her family’s while she was growing up, and she much looks forward to her and her husband’s five-year anniversary trip to visit them. She also experiences, however, an involuntarily association between visiting the Falls and memories of her sister, who befell a tragedy five years prior only days after the wedding anniversary she and her husband are celebrating.

I thus found being there, looking out at the same view my characters had, doubly exhilarating. The inspiration was even more successful than I had hoped and expected, and I accomplished more writing-wise in that three days than I had in an embarrassing length of time prior. The simultaneous predictability and wonder of Niagara Falls entranced me even as it seemed to propel forth a well of creativity and focus that had previously been slightly blocked.

To be truthful, I don’t know exactly what draws me to the Falls. Their extraordinary combination of mystery, beauty, consistency, and power both beckon and captivate me…and in appreciating that, it occurs to me I don’t really need to know why. It is just the case. My enchantment with them supported me in finishing the short story collections I had long planned and wanted to write, and for that tiny personal offering amidst their universal appeal, I revere them all the more. 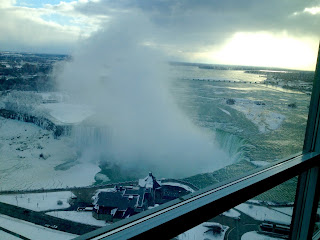 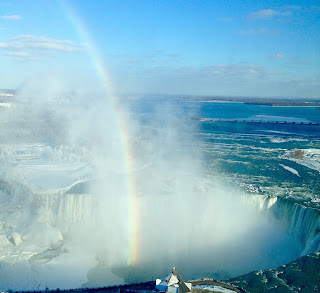 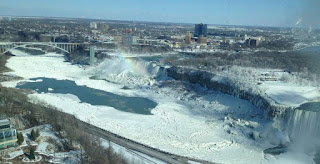 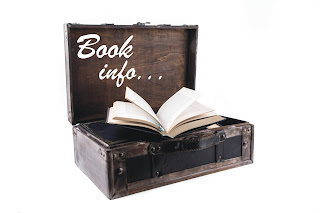 With two original stories (“Soft and Gray” and “Shattered Angels”) joining the eight previously published tales in this collection, If…Then is a testament to the scorching eroticism that can so seamlessly subsist with long-term romance. 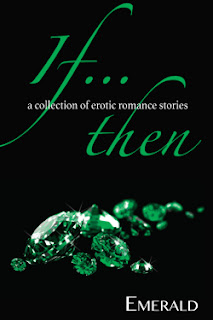 Excerpt from “Shattered Angels” in If… Then:

“I’m sorry again about dinner,” Shelley murmured finally, pulling away as she sat up. Automatically she reached to straighten her hair.
“Stop apologizing,” Kenny said, reaching for her wrist, “and stop messing with your hair. It looks amazing.”
Shelley smiled weakly as she dropped her hands. Her husband went to the phone on the table in the corner, and she breathed a sigh of relief as she heard the low murmur of his voice and knew he was canceling their dinner reservation.
Her gaze landed on the huge white tub as he passed the bathroom on the way back. “Maybe we should try out the whirlpool.”
Kenny switched directions and turned on the faucet, launching a miniature version of the thundering phenomenon out the window. As he reached to check the water temperature, Shelley felt a familiar stirring inside her at the sight of his lean figure encased in jet-black dress slacks and white shirt. His tie was still immaculate. The strength of the attraction made her blink as Kenny straightened and came back toward her. Her eyes dropped to the crotch of his trousers to see if his own arousal was still present.
It was.
He saw her looking. When she looked back to meet his eyes, she knew what she was feeling was obvious in hers. And her desire felt different this time; this was not the desperate yearning for distraction and grounding that had been piling up in her so much for the past few weeks.
She simply wanted him. She wanted her husband.
The awareness made Shelley smile involuntarily, and Kenny looked like he wanted to leap at her. He took a step forward, and she put up her hand.
“Stop,” she whispered. She wanted to look at him. She almost said the words out loud, but as she drank in his appearance, the view of the Niagara Falls to her right suddenly taking a distant second, no words came.
“Strip,” she finally said. Though it was a command, it came out as a simple word, almost an observation, the softness of a request with no power play in its agenda.
Kenny held her gaze as he lifted his hands to his tie, and she felt herself grow wet as he began to pull it loose, the weight of his eyes like the press of his body against her. Those eyes said more than the visible hardness of his cock how much he wanted her, how precisely he felt the same thing she did as he pulled the tie from around his collar and unbuttoned his top button. She could feel the measured restraint in his slowness, the steadiness that kept him from ripping everything off and pouncing on her. It was the same energy, the same patience, that allowed him the groundedness and perceptivity that so attuned him to knowing what she needed. 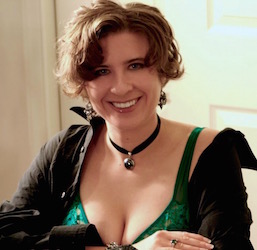