An Experiment – if you dare!

You will need…a sheet of paper and something to draw with (pencil, pen, crayon, watercolors, whatever).

Draw ten hearts on the paper. Now, look at them. Are they identical?  Look again. Are they really identical down to the tiniest detail?

Likely, they are not. And, after the first few, you might have looked back at the previous ones to make sure you were doing it right, if even for a split second.

The thing is, no two relationships are exactly the same and shouldn’t be approached as if they are.  The same could be said regarding projects.

When you drew the first heart, did you have to remember how, or was it something you doodle regularly? The first heart is somewhat like our first relationship – initially unsure, then either becomes something resembling a heart or it becomes the most perfect heart on the page- the one all others have to match.

Now that you’ve drawn them, can you erase them or paint over them? No. They are on the page forever, basically. Even if they are in pencil, a ghost of them will remain.
Now, draw one more heart on the page.

How did you draw that one?  Did you draw it bigger than the others? Smaller? The same? Did you try to make it better? 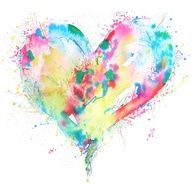