This photo is of (if you don’t know who they are – where have you been?) Salvador Dali and Walt Disney.   They are individuals that embody the magical spark of creativity that I can only dream of having a sliver of in my lifetime.  I am fascinated by these two men.
Salvador Dali is by far one of my favorite artists.  He not only created art, he lived it.  He WAS art.  He embodied it in his lifestyle.  That is what I love about him.  He was fearless in his creativity.  He didn’t care what anyone thought about him or the way he lived his life.  He lived for art.  If only.  If only I could project that sort of fearless attitude.  Many viewed him as “strange”, and still do to this day because they can’t see beyond the canvas.  But I don’t view him as strange, or his art.  I think he was amazing, passionate and a true diamond of a soul.  His art moves me; his portrayal of his beloved wife in his paintings moves me to goose bumps.  His art is romantic, honest and raw.
Walt Disney, on the other hand, inspires me in other ways.  His story motivates me to follow my dreams, no matter how crazy they sound.  He dreamt of building a mouse and duck farm, literally, and he did.  He was inspired by the sparkle in his children’s eyes when they rode a merry-go-round at a park.   He wanted to capture that happiness (happiness is a hard thing to capture) and re-produce it so everyone could have the opportunity to enjoy it.  It took blood, sweat and tears, but he accomplished his dream.  What he did was amazing and inspirational.  I would argue that his original idea has brought more genuine happiness to people than many churches.  I’m not talking about the modern incarnations of the Disney empire, I’m talking about the heart and soul of his original idea.  It was a wonderful idea, an amazingly selfless journey, and he succeeded.
If only I could combine the energy of these two special souls, it would probably split the atom.  Or implode.  They are that rare.
Posted by Kay Phoenix at 9:52 AM No comments:

Email ThisBlogThis!Share to TwitterShare to FacebookShare to Pinterest
Labels: Inspiration

Think Outside of the Box

Don’t we all live in boxes?  Comfy little caves that we were either placed in as a child, or designed for ourselves as the forces around us defeated our desire to stand tall?  Well, that’s a crappy way to live – all cramped and uncomfortable.  Barely room to move, breathe, stretch or even think sometimes.  The limitations are too restrictive.  And, who was it that put the restrictions there in the first place?  Was it a parent, parents, grandparents, or friends?  Or was it yourself, in response to social conditioning?  Was there a moment where you were so thrilled about something, a moment where your light shone so bright only to be extinguished by a mere word, action or thought of someone that you loved and respected?  I’m sure it’s happened.  It has happened to everyone.  None of us are truly alone.  If we could see outside our boxes, we would see that there are hundreds, thousands, even millions of other boxes lined up together, side by side, stretching to eternity.


What would happen if we kicked the side off those boxes and crawled out?  I think we should.  We deserve to live in the sunshine. 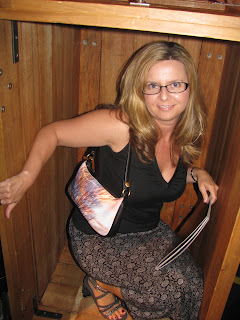