Dinosaurs at the Library 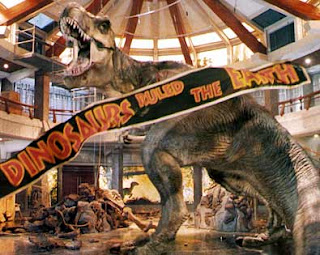 My library was full of dinosaurs!  Big, scary, multi-colored dinosaurs of all shapes and sizes complete with razor sharp teeth and big shiny, watchful eyes.  A few of them actually moved thanks to what I now know were small motorized parts.  The dinosaurs were made of paper mache, that’s also what I know now.
But, when I was young, the resident be-scaled giants were made of bones, muscles, skin and teeth.  And, they watched me with their big eyes, shiny as glass.  I tried to stay out of their view, but it seemed as if one was poised at the end of every aisle, especially the children’s book aisles, which is where I spent my time.  Nonetheless, their watchful gazes didn’t keep me from spending an hour or so every other week browsing the new releases.  I was always looking for something new, having read almost every kids' book my library had in stock.  I even checked out an encyclopedia occasionally.
Dinosaurs.  That is what my library held for me; a land where dinosaurs ran free!
Posted by Kay Phoenix at 10:35 PM No comments:

I’m a firm believer that a person’s dwelling area(s) reflect the state of their mind, body and spirit.  I’ve read several books on the subject and they have only confirmed what that I’ve always felt and known to be absolutely true – our living spaces are “living”.  In fact they are either quite “alive” or “comatose”, whichever reflects our current state of being.


Case in point, I once went with a friend to someone’s residence in order to retrieve a set of dishes that the person had given them.  I had never been to a home in this state of disarray before.  It was dark, the curtains were drawn shut.  It was dusty, smelly, roaches skittered everywhere, and spider webs (and their occupants) leered at me from every corner, literally.  It was a regular Haunted Mansion.  I couldn’t comprehend how someone could live and eat there, let alone sleep there.  And who lived there?   She was an emergency room nurse.  Would I want her treating me or a loved one?  Umm, no.  You might think that statement seems a bit judgmental, but to me someone with a job concerning the well-being of others shouldn’t let their own well-being fall to such shambles.   I later learned that she was fired shortly thereafter  for being under the influence of illegal substances.  Hmmm…  I heard that she went through rehabilitation, threw everything away, cleaned everything and is doing much better.
I’ve seen one room shacks in the Caribbean and Mexico.  There is a difference between being poor, and being dirty.  I’ve been in rich people’s houses that are disgusting and uncomfortable, and in poor people’s houses that are lovely and comforting.
One of the best feelings is being able to let go of “things” that are no longer needed, and one of the first steps to doing that is to clear out some clutter.  Start with a drawer.  It works, it brings clarity.  It adjusts focus.  It calms nerves.  It clears mental cobwebs.
It’s…necessary. 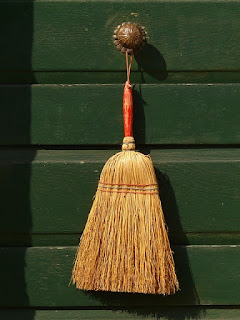 (Disclaimer - Having said all that, I also realize that some people have a mental disorder that requires that they hold on to things. I also have random items that I have held on to that seemingly have no value to anyone, but they do to me. However, I can’t imagine the psychic clutter of an entire house filled with things that I couldn’t bear to get rid of. It would be debilitating.)
Posted by Kay Phoenix at 3:42 AM No comments: